Given US immigration trends in the last decade — an influx from Middle Eastern and South Asian countries where honor violence is part of the culture — the problem will continue to worsen if authorities don’t identify and address it.

The estimated 27 victims of so-called “honor killings” each year in the U.S. don’t fit neatly into the FBI’s exhaustive Uniform Crime Reporting Statistics.

Hidden among thousands of nondescript murders and cases labeled as domestic violence are a mounting number of killings motivated by a radical and dark interpretation of Islam. Honor killings and violence, which typically see men victimize wives and daughters because of behavior that has somehow insulted their faith, are among the most secretive crimes in society, say experts.

“Cases of honor killings and/or violence in the U.S. are often unreported because of the shame it can cause to the victim and the victim’s family,” Farhana Qazi, a former U.S. government analyst and senior fellow at the Center for Advanced Studies on Terrorism, told FoxNews.com. “Also, because victims are often young women, they may feel that reporting the crime to authorities will draw too much attention to the family committing the crime.”

“I learned very quickly that we would receive no assistance from the family. In fact, we received out-and-out defiance and resistance.”

Even cases that appear to be honor killings, such as the Jan. 1, 2008 murder of two Irving, Texas, sisters that landed their father on the FBI’s most wanted list, cannot always be conclusively linked to a religious motivation. Without hard evidence, critics say, ascribing a religious motivation to crimes committed by Muslims demeans Islam. Yet, federal authorities believe they must be able to identify “honor” as a motive for violence and even murder if they are to address a growing cultural problem.

“Honor Violence Measurement Methods,” a study released earlier this year by research corporation Westat, and commissioned by the U.S. Department of Justice, identified four types of honor violence: forced marriage, honor-based domestic violence, honor killing and female genital mutilation. The report, which estimated that 23-27 honor killings per year occur in the U.S., noted that 91 percent of victims in North America are murdered for being “too Westernized,” and in incidents involving daughters 18 years or younger, a father is almost always involved. And for every honor killing, there are many more instances of physical and emotional abuse, all in the name of fundamentalist Islam, say experts.

While women are generally the victims of honor violence, men also may be targeted if they reject an arranged marriage or are assumed to be homosexual. Victims may also be pressured to commit suicide, and may do so without even realizing they are victims of honor-motivated violence, said Baric.

The mother, father and sister (above) of 19-year-old Aiya Altameemi were charged with beating her because she refused an arranged marriage to an older man.

For police who encounter apparent honor crimes, the investigation is typically treated as a regular crime or murder probe, usually under the umbrella of domestic violence. While both issues are tragic and problematic, experts say there are critical distinctions, and that honor violence requires a different approach.

Detective Chris Boughey, of Peoria, Ariz., calls Oct. 20, 2009, a day that “changed my life forever.” That was the day Iraqi immigrant Faleh Almaleki murdered his daughter, Noor Almaleki, by running her over with his vehicle for becoming “too Westernized.” Boughey was assigned as the lead investigator and has since dedicated his career to educating others and taking on similar cases in numerous other states — from Alaska and New York to California, Washington state and Pennsylvania.

Aasiya Hassan was beheaded by her husband, Muzzammil Hassan, because she wanted a divorce.

“In the Almaleki case, I learned very quickly that we would receive no assistance from the family,”  Peoria, Ariz., homicide detectives Chris Boughey said. “In fact, we received out-and-out defiance and resistance. Although we know they are involved, it can be very hard to prove in a court of law.”

Other honor-motivated tragedies in the U.S. have garnered headlines., police arrested the mother, father and sister of 19-year-old Aiya Altameemi in Phoenix after they allegedly beat, restrained and burned her for reportedly declining an arranged marriage with an older man and talking to another boy. Aasiya Hassan was beheaded by her husband, Muzzammil Hassan, at the Buffalo, N.Y., Muslim TV station where they worked for allegedly requesting a divorce. The Pakistani-born killer defended himself at trial, never denied his guilt and was convicted in 2011. A few months before Hassan was killed, Sandeela Kanwal was strangled by her father outside Atlanta for failing to “be true to her religion” because she wanted to leave an arranged marriage.

Yasser Said, a cab driver from Egypt, is suspected of shooting his two daughters, Amina, 18, and Sarah Said, 17, in the back of his taxi because they were dating non-Muslim boys and embracing Western culture. Said has been a fugitive ever since. an Illinois man – Subhash Chander – set an apartment fire that killed his pregnant 22-year-old daughter, son-in-law and 3-year-old grandson because he disapproved of the marriage.

– And in one of the earliest widely reported cases of honor killing in the U.S., 16-year-old Palestina Isa, of St. Louis, was murdered in 1989 by her father Zein Isa, who was helped by her mother. Zein Isa was angry that his daughter had gotten a job and was dating an African-American boy. Both parents were convicted of murder and sentenced to death. Zein Isa died on death row in 1997, while his wife’s sentence was commuted to life in prison without parole.

Honor violence is an even bigger problem in other parts of the Western world, with a reported 11,000 cases of honor violence recorded in the United Kingdom in the last five years while incidents also have been documented in Canada, Germany, France and Sweden.

Baric affirmed that given immigration trends in the last decade — an influx from Middle Eastern and South Asian countries where honor violence is part of the culture — the problem will continue to worsen if authorities don’t identify and address it. Boughey said honor violence, whether it be abuse and murder, FGM, or forced marriage — is much more widespread in America than most people realize and, as it stands, authorities have no proper system in place to track it.

“Honor violence has been largely misclassified by law enforcement, by no fault of their own,” he said. “They simply didn’t know the signs and symptoms of honor-related violence. They do not have the training on how to effectively identify and investigate these cases.”

One of the biggest challenges, Boughey said, is the social pressures to not be deemed “culturally insensitive.” That can keep social service agencies from alerting law enforcement when honor violence crosses their radar.

“Some agencies won’t intervene even after these young women have come forward,” he said. “I am not quite sure when we as a country decided that it was more important to be politically correct than doing the right thing.”

Boughey and his police partner Jeff Balson, working with the AHA Foundation, have developed a curriculum to train law enforcement and members of social service organizations to properly identity such cases, as well as provide adequate help for victims and advocate the need for legislation to be enacted specific to honor violence.

“If anyone mistreats women, they should not seek refuge in Islam,” he said.

In 2013, President Obama signed the Transport for Female Genital Mutilation Act, which prohibits the transportation of a child from the U.S. for the intent of FGM and in 2014 the Department of Health and Human Services held a civil society listening session on the domestic response to the violation. Whether or not the federal government will take further measures to address honor violence remains to be seen, and the DOJ did not respond to a request for comment regarding its action plan based on the study it funded.

But according to Paula Kweskin, human rights lawyer and producer of the Clarion Project’s documentary “Honor Diaries,” the most important thing to be done to combat the issue is to talk about it loudly and frequently.

We cannot let women suffer in silence any longer.”

“Obama’s policies are installing political Islam throughout the Middle East and North Africa in a tidal wave of change already reaping disastrous results for those regions as well as for U.S. interests there,” write Klein and Elliott.

The authors compare Obama’s actions to the policies of Jimmy Carter, which weakened the secular Shah’s regime in Iran, arguably ushering in a Shiite Islamic revolution that continues to this day to support and carry out acts of terrorism worldwide.

Klein and Elliott spotlight the central role Obama played in the downfall of U.S. ally Hosni Mubarak, citing information that indicates elements of the anti-Mubarak uprising in 2011, particularly political aspects, were being coordinated with the U.S.

“Impeachable Offenses” presents new information the Obama administration worked behind the scenes with the Egyptian Muslim Brotherhood to facilitate a transfer of power after Mubarak’s resignation.          Islamic caliphate?

Mubarak was only the beginning, write Klein and Elliott. Obama’s support for a U.S. ally’s ouster and replacement with radical Islamic elements would be repeated numerous times in the Middle East and North Africa, to the great detriment of the American war on terror, 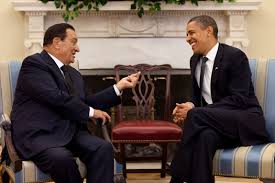 Mubarak was only the beginning.

“Impeachable Offenses” spotlights Obama’s role in the downfall of Tunisian President Zine al-Abidine Ben Ali, who fled Tunisia Jan. 14, 2011. Ben Ali largely was seen as an ally of the West, even working behind the scenes with Israel on occasion.

Another U.S. ally forced to step down after mass protests was Yemen’s president Ali Abdullah Saleh, who was considered a crucial ally in the U.S. fight against al-Qaida in his country and throughout the Middle East.

Klein and Elliott present evidence Obama was involved in Saleh’s ouster, which brought the Muslim Brotherhood-founded Islah party to rule.

The U.S. similarly has called for the king of Morocco, Mohammed VI, one of the most Western-oriented leaders in North Africa, to open his monarchy to a power-sharing agreement with a new parliament to be voted on by the people.

While the king still retains vast powers, he now shares in a coalition government with the Justice and Development Party, which won a plurality of the vote, the first under the country’s new constitution. The party advocates a society governed by Islam and has been described as an offshoot of the Muslim Brotherhood.

Klein and Elliott bill their book as a well-documented indictment of Obama based on major alleged violations.

Among the alleged offenses enumerated in the book:

Obamacare not only is unconstitutional but illegally bypasses Congress, infringes on states’ rights and marking an unprecedented and unauthorized expansion of IRS power.

The Obama administration recklessly endangered the public by releasing from prison criminal illegal aliens at a rate far beyond what is publicly known.

The president’s personal role in the Sept. 11, 2012, Benghazi attack, with new evidence regarding what was transpiring at the U.S. mission prior to the assault – arguably impeachable activities in and of themselves.

From “fusion centers” to data mining to drones to alarming Department of Homeland Security power grabs, how U.S. citizens are fast arriving at the stage of living under a virtual surveillance regime.

The illegality of leading a U.S.-NATO military campaign without congressional approval.

Obama has weakened America both domestically and abroad by emboldening enemies, tacitly supporting a Muslim Brotherhood revolution, spurning allies and minimizing the threat of Islamic fundamentalism.

This is Klein and Elliott’s fourth book investigating the Obama administration. The other titles are “Fool Me Twice,” “Red Army” and “The Manchurian President.”

This entry was posted in Honor Killings and tagged Honor Killings, Honor Violence, muslim Brotherhood. Bookmark the permalink.
%d bloggers like this: