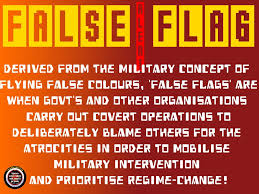 After being downplayed for well over a year, the reality that Al-Qaeda terrorists are leading the other rebel groups in Syria, and that the Obama administration is set to arm extremist radicals who will later pose a direct threat to American national security, is now widely accepted.

Even the Mayor of London Boris Johnson broke ranks with British Prime Minister David Cameron earlier this week to warn that there was no way to prevent such weapons reaching “Al-Qaeda-affiliated thugs” and that western powers would be “pressing weapons into the hands of maniacs”.

President Putin To Rothschild Czar David Cameron Of England: Do You Want to Arm People Who Eat The Organs Of Their Enemies?

President Putin To Rothschild Czar David Cameron Of England: Do You Want to Arm People Who Eat The Organs Of Their Enemies? Obama Arms Syrian Jihadists Using American Tax Payer’s Money ~ While Jihadists Behead Christian & Feed His Body To Dogs!

Obama rallied blood thirsty Muslims while a U.S. paid Senator. Christians were slaughtered and burnt alive in their Christian Churches ~ all for his Sharia Cousin Odinga! 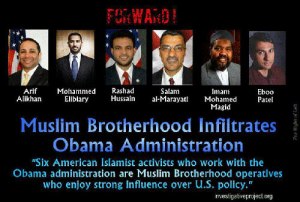 documents from WikiLeaks surfaced that indicated Barack Obama and key individuals in the government had close ties to the Muslim Brotherhood, a group that they backed during the Arab Spring, which is considered a terrorist organization by most of the world.

According to a report by Breitbart, this evidence seems to back up claims by U.S. Army Lieutenant General William Jerry Boykin, who said that individuals with deep connections to the Brotherhood have infiltrated the White House, Pentagon, and Department of Defense.

The former Delta Force member said that Republicans in Congress should have taken concern expressed by Michele Bachmann over former Secretary of State Hillary Clinton’s Deputy Chief of Staff Huma Abedin, who the Minnesota representative believed had ties to the Muslim Brotherhood, much more seriously.

Boykin went on to say that individuals with close ties to the group work in every major federal agency. 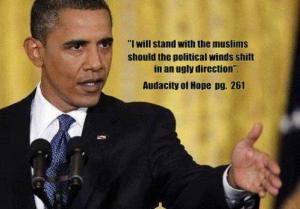 If this is true, and it likely is, this is very scary. The Muslim Brotherhood has already launched a U.S. political party for the sole purpose of implementing Sharia law in American communities.

Fortunately, many states have been proactive and have already passed legislation banning its implementation.

Rep. Bachmann is also spearheading a piece of legislation to have the Muslim Brotherhood labeled a terrorist organization. With Gen. Boykin’s claims and the WikiLeaks documents, it is critical this legislation is passed.

If it does, Obama’s support of the Brotherhood and it’s offshoots like Hamas, will be illegal, and those with connections to the group will be removed from their posts in the government. It’s imperative that citizens write and call their representatives and demand they support Bachmann’s bill in order to keep America safe.

Please share this article on Facebook and Twitter if you support labeling the Muslim Brotherhood a terrorist organization and removing those with connections to the group from the government. 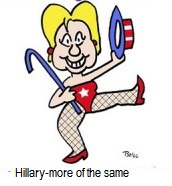